My first memory of the Soviet Union was in my fourth-grade classroom and staring at the My Weekly Reader wall chart. It showed the red Soviet Union spreading halfway around the world. In my junior year in college, I sat in a lecture hall listening to enthralling lectures on Russia’s tsars. The portrayal of the tsars, the Russian landscape, and the inner psyche of its people stayed with me. From 1963–1987, I taught Marxist socialism, Russian history, and the Soviet Union to eighth-graders. I imagined some day I would find a way to teach Soviet children.

By the time Mikhail Gorbachev became General Secretary of the Communist Party of the Soviet Union in March 1985, I was tired of Soviet propaganda, its braggadocio to the rest of the world about their space spectaculars, military might, and expanding nuclear arsenal. I made a commitment to travel behind the Iron Curtain to seek out ‘real Russians.’ In my book, I describe Russians as living behind a red veil: the face the Communist Party projected onto its citizens, foreign visitors, and the world at large.

It was a unique time in Soviet history in which Gorbachev attempted to uproot Communist norms and create a more open society; his reign lasted less than six years. I was more than fortunate to live among Russians at that time listening to their desires to come out from under the Communist Party’s oppressive rule. My book offers insight to uninhibited Russian thinking, which has lurked underneath authoritarian rule for centuries. Readers have found my insights intriguing, respectful, and revealing about the Russians and this American among them.

The Russian people, despite the evil actions of their leader, are worthy of our knowing and understanding. They are, after all, parents, grandparents, uncles and aunts, cousins, boys, girls, students, and joyful, sad, hopeful … I found them to be engaging, thoughtful, and caring. I am grateful to have known so many. 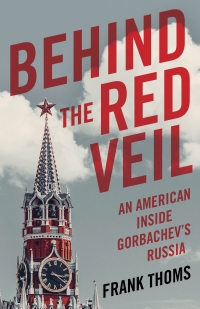