“After school, Thoms will walk to his hotel room on the Nevsky Prospekt with a small tape recorder pressed against his cheek. He refuses to forget a smile, a tear, or an important confrontation with Soviet life. He gathers impressions of the Soviet Union like a real-life Holden Caulfield, the consummate social satirist. Nothing seems to escape his discerning eye. By watching and interacting, Thoms believes he is helping civilization from going over the cliff—a teacher in the rye.” (From a reporter who met the author in Leningrad in the fall of 1986)

This reporter's insight came out of my obvious interest in all things Russia and the Soviet Union. My first memory was sitting in my fourth-grade classroom staring at the My Weekly Reader wall chart. It showed the red Soviet Union spreading halfway around the world. Eleven time zones! Red! The only color on the chart! Less than two years later, the chart had expanded to include Mao’s China. I wondered, What would become of us? Would the red armies march beyond their borders?

In my junior year in college, I sat in a lecture hall taking notes for Professor R. G. L. Waite’s enthralling lectures on Russia’s tsars. My portrayal of their reigns, the Russian landscape, and the inner psyche of its people stayed with me. As a new teacher, I taught Marxist socialism, Russian history, and the Soviet Union to eighth-graders. For the next twenty years in my classroom, I pursued my curiosity of all things Russian and Soviet. I imagined some day I would find a way to search out the Russian people.

By the time Mikhail Gorbachev became General Secretary of the Communist Party of the Soviet Union in March 1985, I was tired of Soviet propaganda, its braggadocio to the rest of the world about their space spectaculars, military might, and expanding nuclear arsenal. I made a commitment to travel behind the Iron Curtain to seek out ‘real Russians.’ In my book, I describe Russians as living behind a red veil: the face the Communist Party projected onto its citizens, foreign visitors, and the world at large.

My first tour in October 1985 led to seven more; and one three years after Mikhail Gorbachev's reign. It was a unique time in Soviet history in which Gorbachev attempted to uproot Communist norms and create a more open society; his reign lasted less than six years. I was more than fortunate to live among these Russians listening to their desires to come out from under the Communist Party’s oppressive rule.

These voices have resurfaced with the rearrest and imprisonment of Alexander Navalny in January 2021. To gain perspective of their cries, my book offers insight to uninhibited Russian thinking, which has lurked underneath authoritarian rule for centuries. Readers have found his insights intriguing, respectful, and revealing about the Russians and this American among them. 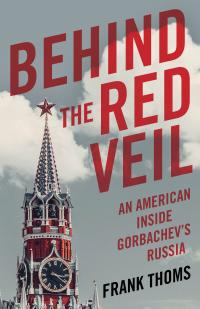